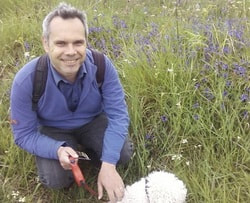 Get to know Gareth

What sparked your interest in bats?
Partly by chance. I’d just finished a PhD on bird behaviour, and was offered a postdoc working on the aerodynamics of bat flight. My main interests have always been in behaviour, ecology and conservation, so I able to combine these with my new fascination for bats when I was offered a Royal Society Research Fellowship at Bristol.

If you were another animal what would you be?
I’m fascinated by how other organisms perceive the world. I would like to start by being another human – if only to see the world through someone else’s eyes – and then something with extreme sensory adaptations. Of course it would be interesting to understand ‘What is it like to be a bat?’, especially by flying and echolocating, although a platypus using electrolocation underwater would be fun too.

Where is your favourite place and why?
Lecturing on a trip for university alumni around Galapagos. The history, tame wildlife, scenery, weather, sea cruises and socialising were wonderful.

Tell us something we wouldn't not know about you from your photograph...
I have a very friendly Bichon Frisé dog called Max.